Researchers start to understand blood vessels one cell at the time

A database on endothelial cells may enhance our understanding of the function of the close to 100,000 km of specialized blood vessels in the mammalian body. That is the perspective of a research project with contribution from AIAS Fellow Joanna Kalucka, just published in the scientific journal Cell.

New surprising knowledge on endothelial cells in a dozen different murine tissues is now available in an open access, user-friendly, database for professionals. This is the result of a new ground-breaking research study, published in the journal Cell. A study that may help to explain why there are, for instance, more severe graft rejections of lung transplants compared to other organs.

Involved in the study is newly appointed Assistant Professor Joanna Kalucka from the Department of Biomedicine and Aarhus Institute for Advanced Studies (AIAS) at Aarhus University. Joanna Kalucka together with colleagues Laura de Rooij and Jermaine Goveia from Katholieke Universiteit (KU) Leuven and VIB, Belgium are the first authors of the study. They describe the new research result and the accompanying Endothelial Cell Atlas as a tool that can be used to improve treatments for many diseases involving blood vessels.

All organs are connected by blood vessels

“Blood vessels form a network of small and large transport conduits, which, supported by endothelial cells, bring oxygen, nutrients and waste to and from the organs. If all blood vessels in a human body were placed next to each other, the length would be two and a half times the circumference of the earth, or approximately 100,000 km of blood vessels. This illustrates the significant importance of blood vessels and underlines the justification of our mapping,” Joanna Kalucka says.

Endothelial cells are a specialized layer of cells lining inside of all our blood vessels, and the current study confirms the prior knowledge that these cells adjust to their surrounding environment and adapt to the various functions and needs of the organs.

From highways to cobblestones

In the current study, endothelial cells in blood vessels of the mouse brain, lung, liver, colon, small intestine, testes, kidney, spleen, heart and different muscle groups are characterized. This mapping, according to Joanna Kalucka, has surprised the researchers in several ways.

“If you look at an organ such as the brain, endothelial cells align closely and form a very tight continuous monolayer that allows blood to flow quickly and effortlessly to deliver oxygen to the brain, while restricting the passage of toxins and pathogens. In the metaphor of transport, it would correspond to a newly paved highway which is smooth and stable. In the liver, on the other hand, endothelial cells correspond to a road paved loosely with cobblestones,” says Joanna Kalucka.

She explains that the cobblestones' openings and cracks, their morphology, exist due to the liver's metabolic functions, which involve nutrient trafficking.

“For an optimal liver function, it is necessary to form porous blood vessels since this creates the possibility for nutrients to passage. That is why, we suspected that endothelial cells have different molecular signatures in various organs and this inspired our research,“ says Joanna Kalucka. “This atlas supports us now to understand the molecular cues attributed to endothelial cells which are, in the transportation metaphor, the cells resembling the structure of highways or cobblestones or other arrangements that a particular tissue or organ requires.” 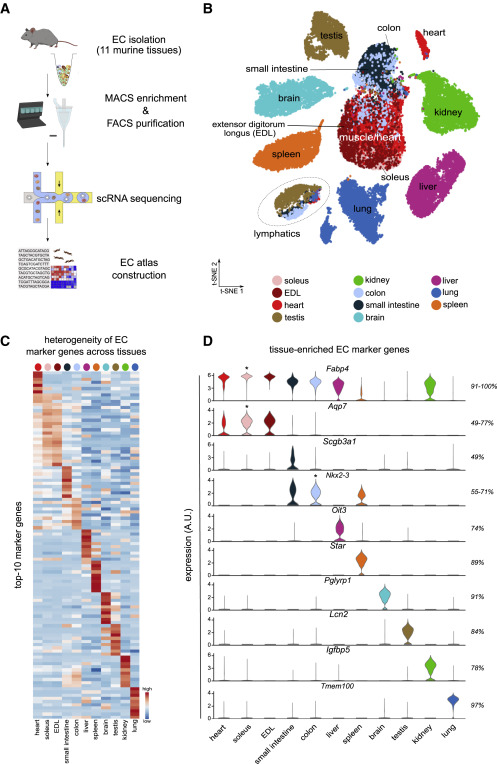 The research team is convinced that mapping of endothelial cells will facilitate the development of new drugs and other treatment methods. Joanna Kalucka predicts that treatment of ‘the big killers’, e.g. cardiovascular (heart) diseases, as stroke and atherosclerosis, as well as cancer could benefit from the knowledge generated by this new atlas.

The same goes for liver, lung and intestine, where endothelial cells represent the first contact point with immune cells or pathogens. Particularly in the lung, endothelial cells are equipped with molecules which are capable of generating an immune response. This information might be the breadcrumb of a much bigger discovery and will help to explain why there are more severe graft rejections of transplanted lungs compared to other organs.

Everything starts with a mouse study

The study's mapping method is a single-cell RNA sequencing analysis documenting the gene expression profile (transcriptome) of individual endothelial cells. A critical reader might point out that the researchers have mapped endothelial cells of mice - and that mice are an imperfect model for human diseases, which is of course a fact. In contrast, Joanna Kalucka points out that to be able to develop new drugs, we still need animal models to predict drug efficacy in humans.

The new database is hosted by the laboratory of the article's senior author, Professor Peter Carmeliet of Katholieke Universiteit (KU) KU Leuven in Belgium, who is also an adjunct Honorary Skou Professor at Aarhus University. In practice, the database is created by the VIB-KU Leuven Cancer Biology Center, where Carmeliet is also associated: https://www.vibcancer.be/software-tools/ec-atlas

More about the research results behind the study