It is now the third year that gray whales have been found in very poor condition or dead in large numbers along the west coast of Mexico, USA and Canada, and scientist have raised their concerns. An international study published this week in the journal Marine Ecology Progress Series, led by Aarhus University researcher Dr Fredrik Christiansen, suggests that starvation is contributing to these mortalities.

It’s mid-January 2021, and the first gray whales from the eastern North Pacific population have started to arrive in the breeding lagoons in Baja California, Mexico. Since the start of their southbound migration from their high latitude feeding grounds, several sightings of emaciated gray whales have already been reported along their migration route.

This has raised concern among scientists that the unusual mortality event (UME, an unexpected phenomenon during which a significant number of a marine mammal population dies), that started in January 2019, and which so far has resulted in 378 confirmed gray whale deaths, and possibly many more unrecorded, is entering its third year.

The gray whale (Eschrichtius robustus) is the only living species in the family Eschrichtiidae, in honour of the Danish zoologist Daniel Frederik Eschricht. Gray whales undertake annual migrations between feeding grounds in the Bering, Chukchi, and Arctic Seas, and breeding grounds from the Southern California Bight to lagoons along the Pacific coast of Baja California, Mexico.

During the summer feeding season, between May and October, the whales build up large amount of energy reserves, mainly in the form of blubber, to support the energetic costs of migration and while residing on the breeding grounds. Sufficient energy reserves is crucial for the reproduction and survival of gray whales, which do not feed during the migration and breeding season.

Mary Lou Jones and Steven Swartz, co-author on the current paper, conducted the first research and monitoring of the gray whales from 1977 to 1982 in Laguna San Ignacio (LSI) in Baja California Sur, Mexico. In 2006 with their colleague Dr Jorge Urban, co-author on the current paper, they initiated the Laguna San Ignacio Ecosystem Science Program (LSIESP), a project of the Ocean Foundation, which  is a partnership with the Universidad Autónoma de Baja California Sur (UABCS) and international collaborators.

Drones – the bathroom scales of the whales

In 2017, Dr Fredrik Christiansen from the Aarhus Institute of Advanced Studies and the Dept. of Zoology at Aarhus University, and Professor Lars Bejder from the University of Hawai’i at Manoa, joined LSIESP to study the body condition of gray whales with the use of drone photogrammetry. The technique involves measuring the body length and width of gray whales from vertical photographs taken by drones above the whales, from which a measure of relative body condition (or fatness) of individual whales can be obtained.

Already in the second year of sampling, the researchers found a marked decline in the body condition of juvenile and adult gray whales visiting Laguna San Ignacio. The decline was also visible in 2019, at the start of the current UME. The decline in body condition also coincided with a drop in the number of mother-calf pairs sighted in Laguna San Ignacio, which indicated a reduction in the reproductive rate of female gray whales.

A similar UME occurred in 1999-2000, when 651 gray whales were recorded dead along the west coast of North America. During that two-year event, the gray whale population declined with about 25% from about 21,000 animals in 1998 to about 16,000 in 2002. It is yet unknown what effects the current UME is having on the eastern North Pacific population. 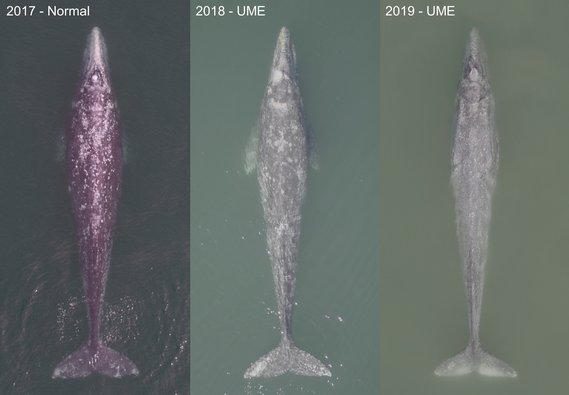 Starvation, decline in prey availability and warming of the Arctic

While the study by Dr Fredrik Christiansen and colleagues suggests that the decline in survival and reproductive rates of gray whale during the current UME was caused by starvation, the underlying factors that caused this reduction in body condition has not yet been determined. The fact that gray whales in 2018 and 2019 arrived on their Mexican breeding grounds already in significantly poorer body condition, indicates that this decline must have occurred either during the previous feeding season and/or during the southbound migration.

“It appears that a large number of gray whales are leaving their feeding grounds already in a poor nutritional state and by the time they have completed the breeding season in Mexico they have depleted their energy reserves and starve to death”, says Dr Christiansen.

A decline in prey availability on the main feeding grounds is hence the most probably explanation for the current UME. Since the late 1980s, there has been a decline in the abundance and biomass of amphipods, the main prey for gray whales, in the central Chirikov Basin, the main feeding area for gray whales in the Bering Sea. This in turn is believed to be caused by warming of Arctic waters as a result of natural and/or human-induced climate change. If that is the case, UMEs like this one might become more frequent, which could result in a decline in gray whale numbers in coming decades.

As the world keeps struggling with the Covid-19 pandemic, LSIESP researchers are preparing for the 2021 field season in Laguna San Ignacio to hopefully get one step closer to understanding the full extent of the current gray whale UME.