A recent study suggests that kelp gull attacks negatively affect the behaviour of southern right whales off Península Valdés in Argentina. Scientists arrived at this conclusion after comparing the behaviour of southern right whales at two sites, one with (Península Valdés, Argentina) and one without (Head of Bight, Australia) kelp gull attacks. This study was published in the journal Marine Ecology Progress Series by Taylor Azizeh under the supervision of AIAS fellow Dr Fredrik Christiansen.

Southern right whales show strong maternal fidelity to calving grounds, meaning that many whales return year after year to the same spot to raise each generation of young. They prefer shallow, protected waters, such as the ones off the coast of Península Valdés in Argentina. Here fasting right whale mothers rear their young while nursing their babies with milk produced from energy reserves acquired at their feeding grounds, where they migrate in spring and summer.

In Península Valdés, Argentina, southern right whale calves died in unprecedented numbers between 2003 and 2013. While the exact cause of this high mortality remains unknown, a leading hypothesis suggests a link to kelp gulls harassment. Since the 1970s, the gulls have learned to s prey upon the whales by gouging chunks of blubber and skin from the whale’s exposed back when they surface to breathe. In recent decades, gull attacks have increased in frequency and intensity, and focused primarily on young calves since mothers have developed evasive behaviours.

Gull attacks are defined as “micropredation” because, as is the case with mosquitoes and vampire bats that feed on their prey’s blood without killing them, gulls take bites of blubber from the whales without causing their immediate death. While the consequences of the notable increase in gull attacks on calf health and survival are yet to be fully understood, we know from previous studies that constant harassment triggers a strong physiological stress response. This sustained high-stress level likely renders calves more susceptible to other disturbances. The current study adds to this evidence by showing that gulls selectively attack calves with pre-existing wounds, and that wounded calves are six times more likely to be attacked, and at a nine times higher attack rate.

To understand the severity of the kelp gull micropredation on southern right whales off Península Valdés, the team of scientists compared them with a similar, yet undisturbed population of southern right whales in an area where no gull attacks occurred, at the Head of Bight in South Australia.

The scientists analysed video footage collected with drones to assess the behavioural consequences of gull attacks on whale mothers and calves.  They noted that when attacked by gulls, the whales at Valdés reacted with rapid and energetically costly movements, such as flinching, submerging, accelerating, rolling over, or slapping the water with their tails or fins. 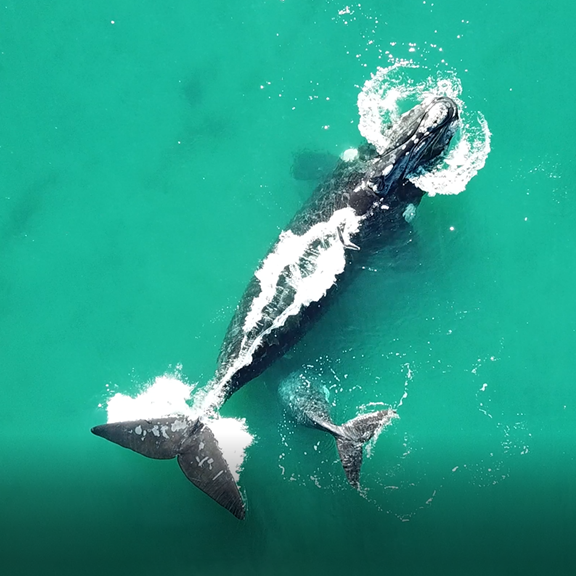 Image: A southern right whale mother and calf respond to a gull attack at Valdés with an energetic “flinch” characterized by a startled jerk of the tail and head upwards (Credit: Fredrik Christiansen)

Another frequently observed behaviour was a strategy that whales in Península Valdés have developed to avoid gull attacks. This is a respiration mode known as “oblique breathing” in which they emerge from the water with their blowholes exposed to take a breath, but keep their backs submerged. This causes them to fight against their natural buoyancy and may have extra energetic costs. Oblique breathing is undocumented in any other right whale population globally, although harassment by birds has been seen elsewhere. 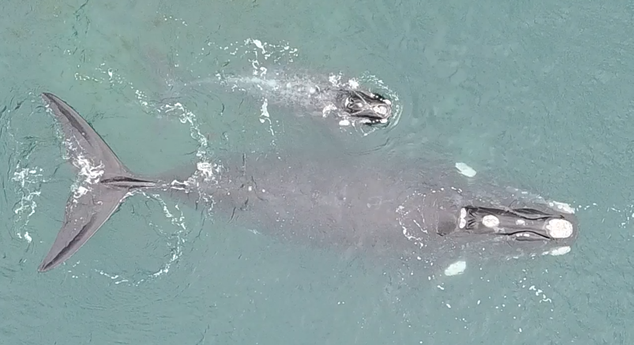 Yet, despite this avoidance strategy, the whales at Valdés increase their breathing rates when attacked by gulls, and breathing rates are still higher than in Australia even when gull attacks were not occurring. Higher breathing rates mean that whales are requiring more oxygen, which implies higher energy expenditures to maintain their metabolism. These higher energetic demands can negatively affect the whales’ fat stores and body condition, which in turn may impact their survival and reproduction. Moreover, right whale calves in Argentina were seen to nurse more frequently, but for shorter periods compared to southern right whales in Australia.

While gull attacks on southern right whales in Península Valdés have been studied for decades with increasing concern, this is the first time that the magnitude of the behavioural changes caused by the attacks has been able to be estimated, by comparing them to an undisturbed population of whales in Australia. The results of this study highlight the relevance of this problem for Valdés whales and calls for immediate mitigation actions to reduce gull attacks.  Moreover, since micropredation of cetaceans by gulls is also being seen in other parts of the world, a call for early action at these sites is warranted.